A couple got engaged at Sam Smith’s Golden 1 show. See how Smith reacted

Love wasn’t just in the air because of Sam Smith’s music at his recent Golden 1 Center tour stop as the artist actually paused in the middle of singing his hit song “Latch” to acknowledge a man proposing to his girlfriend in the front row.

According to a report on the Golden 1 Center official website, Mark DeMille planned the proposal to his new fiancee, Samantha, with a little help from the arena’s staff. DeMille told 106.5 The End’s Wake Up Call hosts that he tried to reach out to Smith himself, but was unsuccessful.

So, he contacted Golden 1’s staff and was able to get a little assistance with being able to be center stage during the couple’s favorite song.

DeMille, who dated Samantha for four years prior to his proposal, decided to pop the question at the concert because Smith’s music was a big part of the couple’s relationship, DeMille told the Wake Up Call.

“I was not expecting it at all,” Samantha told Golden 1 Center. “When he got down on one knee, I thought, ‘Oh my gosh there are like 13,000 people watching us right now.’ ”

Smith’s reaction was caught on video as the popular singer blew kisses to his newly-engaged fans and said, “This couple here just proposed in front of me. Oh my god. Congratulations, you guys.”

In 2015, Smith won four Grammy Awards, including for Best New Artist and Best Pop Vocal Album (“In the Lonely Hours”). His single “Stay With Me” won Grammy awards for Record and Song of the Year. Smith’s second album and the reason for the tour, “The Thrill Of It All,” will be released Nov. 3. Smith is also scheduled to perform Oct. 7 on “Saturday Night Live.”

The video of the proposal and Smith’s reaction can be seen on Golden 1 Center’s YouTube channel and an audio clip of the couple’s interview on The Wake Up Call show can be heard here.

A version of this story was also published in the print edition of The Sacramento Bee in the local section on page 3B Aug. 31, 2018. 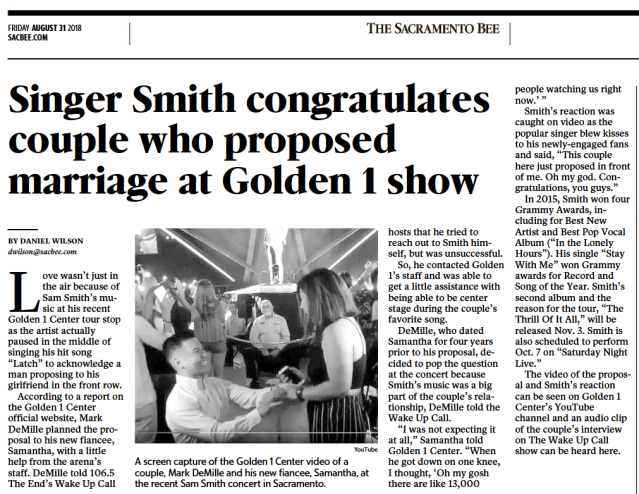