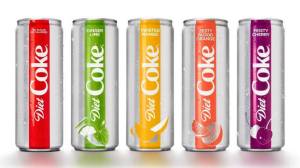 Coca-Cola is introducing four new Diet Coke flavors in a new campaign to “re-energize and modernize Diet Coke for a new generation of drinkers.” The Coca-Cola Company

The Coca-Cola Company is introducing the first major change to its popular Diet Coke brand since its launch 35 years ago with the addition of four new flavors and a new look as well.

According to a press release, Coca-Cola gathered feedback and ideas for the new flavors from more than 10,000 people across the United States.

In addition to regular Diet Coke’s currently offered sizes and packages, the new flavors will be offered in a tall and slim 12-ounce can and in packs of eight. The new cans will be similar to the company’s Dasani Sparking product.

“Millennials are now thirstier than ever for adventures and new experiences, and we want to be right by their side,” Rafael Acevedo, Coca-Cola North America’s group director for Diet Coke, said in the release. “We know Diet Coke has all kinds of fans – from people who have loved its great taste since it launched in 1982 to millennial men and women who are always looking to try new things.”