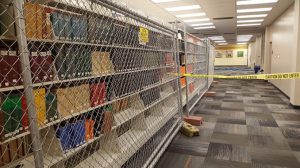 Sections of the lower level of the library are cordoned off after a water pipe in Grumpy Mule coffee shop burst, causing a large leak. Photo by Joel Boland.

After a water line burst early on the morning of Sunday, Sept. 18, Grumpy Mule, Sac State’s newest coffee shop, was forced to cease operations until repairs to its floor could be completed.

Students who wanted a morning pick-me-up from the first U.S. location of the United Kingdom based coffee company were greeted with a sign on the front door that said it would be closed until further notice. Grumpy Mule reopened on Wednesday, Sept. 28.

In addition to floor damage in Grumpy Mule, the water leak flooded the floor of the lower level of the library, which damaged hundreds of books, and moistened the floor in the vestibule leading into the Multi-Cultural Center.

“It seems like these things always happen on weekends when no one’s around,” said Jim Reinhart, the executive director of University Enterprises, Inc., which operates Grumpy Mule.

Reinhart said that the cost of repairs will be covered by UEI’s insurance policy. The cost of the damage is unknown as of press time because UEI has yet to receive a bill from Belfor, the emergency property restoration company that took care of the cleanup process.

“(Belfor has) special equipment that tests through walls and ceilings to see if there’s any moisture there and then they take the appropriate steps,” Reinhart said. “They have the right staff and equipment to make sure that there’s no risk of mold or any problems afterward.”

According to Amy Kautzman, the dean of the University Library, 74 boxes of books were removed from the library by Belfor in an effort to save them following the flood.

The boxes, each containing approximately five to 10 books, included a historical series containing documents from the British Parliament.

“They immediately began pulling books,” said Kautzman. “They deep freeze them and then they take away the humidity and bring them up to temperature and then they use a press so that the books should hopefully be flat.”

Kautzman said that she expects it to take about a month before the materials will be returned to the library.

In addition to the damaged books, the carpeting in a large area of the library’s lower level as well as several ceiling panels that fell to the floor had to be replaced.

Kautzman said that it was lucky that there were no students in the lower level of the library when the leak occurred because it happened before the library opened for the day.

The lower level just reopened after repairs were finished from an asbestos cleanup in the summer.

According to Patsy Jimenez, program coordinator for the Multi-Cultural Center, it was “business as usual” in the center following the leak.

Reinhart said that Belfor used industrial fans and dryers to remove the moisture from the carpets in the vestibule and that as far as he understood it, no water made it into the center itself.

Despite losing revenue during Grumpy Mule’s closure, Reinhart said that the student employees were paid for that time.

“We just hope that people will come back,” said Steven Davis, director of dining services for UEI. “It’s a new concept, it’s a great coffee product and program and the first of its kind in the United States. We’re very proud to be part of that.”